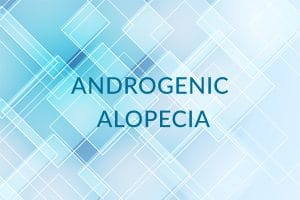 The term alopecia is often used as a catch-all to describe hairlessness – but the reality is far more complicated than that. In truth, several distinct types of alopecia all exist, each of which has its own causes, risk-factors and treatments.

Understanding this is key to understanding a potential diagnosis, and deciding which treatment avenues to pursue.

Androgenic Alopecia is one such variant of the hair loss condition.

What is Androgenic Alopecia?

So, it’s not a niche problem. Pattern hair loss is a concern for everyone. Even if it hasn’t affected us personally, we all know someone struggling with the condition in some form.

But what is Androgenic Alopecia? It’s the gradual recession of hair on specific parts of the head.

For men, Androgenic Alopecia typically begins just above the temples, continuing towards the centre of the scalp. Generally, the rim of hair from above the ears to the rear of the head are not affected. In women, it’s harder to observe similar patterns. The hair loss is scattershot rather than receding, occurring throughout the head without a discernible progression. Although less extreme in its onset, both conditions cause similar feelings in men and women.

Hair is tied to our identities and how we feel. When we begin to lose it, it’s understandable to experience negative emotions such as sadness or stress.

The causes of Androgenic Alopecia are interesting. That’s because while the causes for pattern baldness in men are widely accepted, scant evidence exists for why women experience it.

In men, Androgenic Alopecia is considered to come from a combination of genetic and hormonal factors. Many men are genetically predisposed to premature hair loss, while an imbalance in the hormonal levels of some men may be enough to cause an outbreak or even sustained period of hair loss.

For women, the answers are less clear. Having said that, female pattern hair loss is generally believed to result from more environmental factors such as:

How We Can Help

Advanced Hair Studio’s world-class treatments are proven to work and change the lives of sufferers of Androgenic Alopecia. Don’t think that your pattern hair loss is a long-term and irreversible condition. It isn’t. We’ve helped over 500 000 people, and our results are remarkable, the key is early intervention.