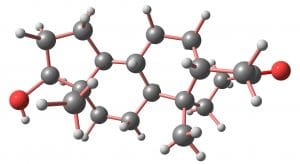 DHT (dihydrotestosterone) performs many roles in the body. Primarily it is an androgen that is responsible for creating the features that are typical of makes, such as body hair, muscle mass and a deeper voice. The hormone testosterone is converted into DHT by the enzyme 5-alpha-reductase (5-AR).

The most common type of hair loss for men is male pattern hair loss, which is where hair is lost at the temples and crown. DHT is thought to be a significant factor in this type of hair loss. To understand the role it plays, we need to look at how hair grows.

There are three phases of hair growth: anagen, catagen and telogen.

The first phase is the growth phase, which hairs remain in for two to six years and 85% of hairs are in this phase.

During the second phase, the hair follicle renews itself, this process only last two weeks.

The final phase, telogen, is the resting phase in which the follicle lies dormant for one to four months. After this phase behind, the hair is pushed out of the pore by the new growth and the old hair falls out.

DHT causes follicles to become miniaturised, which means the anagen phase grows shorter and the dormant, and the telogen phase lasts longer. Eventually, the discrepancy between the two phases grows so large that the new hairs are incapable of breaking through the skin and the weaker telogen hairs fall out with nothing to replace them.

Eventually, the follicles become so small that the hairs are reduced to vellus hairs, which are the type of hairs found on infants.

So, while DHT is essential to body hair growth in males, it is detrimental to hair growth on the head.

If DHT causes the hair to fall out, then reducing DHT is important in reducing hair loss. There are a variety of medications available that seek to suppress DHT, all with varying results. There are a number of brands out there, so we recommend only using the inhibitor that we suggest.

Side Effects of DHT Blockers

As DHT is an essential sex hormone, reducing it can lead to some complications ranging from impotence to depression. It’s also important to remember that hair loss, especially male pattern balding is far more complicated than DHT. Merely reducing DHT will not necessarily prevent further loss and it will not encourage new growth.

If you’re dealing with hair loss, you should visit Advanced Hair Studio for a free, no obligation Hair Check. We can diagnose your balding and chart the best way forward for your unique circumstances. We have several Men’s Therapies designed to stop hair loss and regrow hair. Don’t accept going bald; help is there, you just have to take it!